The urgent need for such specialists is evidenced by the fact that one of the main conditions for employment of candidates for law enforcement agencies, departments and institutions of Ukraine is the presence of an officer’s rank.

Guided by the above, in 2002 the Chernihiv National University of Technology organized the training of students under the program of reserve officers запасу. 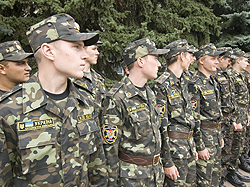 Department of Military Training of SSU, established on the basis of the Military Institute of Missile Troops and Artillery

Department of Military Training, Kharkiv University of the Air Force